First of all: the world is still here!

Secondly: I’m back! Very little happened here for the past two months because I was busy saving the world from apocalypse (i.e. I was busy staying on top of schoolwork). Anyhow, I can now enjoy my two weeks off.

Thirdly: I started working on Rise of the Guardians soundtrack! I went to the theatre this past Saturday to catch a breath between exams. Of course, How to Train Your Dragon wins both in story and score, but the artistic design of RotG is equally breathtaking. Plus, who doesn’t love a character as cool as Jack Frost? (Yes, I count myself among the 90% who went to see the film…)

To start things off, here’s Jack’s theme from the opening scene (click here for the original):

Though RotG is not loaded with as many distinct melodies as HtTYD, Desplat certainly made sure they are memorable all the same. That’s his big success. If you’ve seen the film, you’ll understand why I still get goosebumps whenever I play this on the piano.

I now have five finished arrangements on hand. That number may go up, or it may not. In any case I’m dead certain I won’t arrange the whole soundtrack. And have I mentioned that it’s only been less than a week since I saw the film? I’m heading for a productivity record here…

If Rise of the Guardians interests you as much as HtTYD, keep yourselves cozy this Christmas holiday with some new music!

P.S. Oh, and lastly:
(I know you love this site for the sheet music and all, but I’ve got to make you read what I write once in a while, eh?) 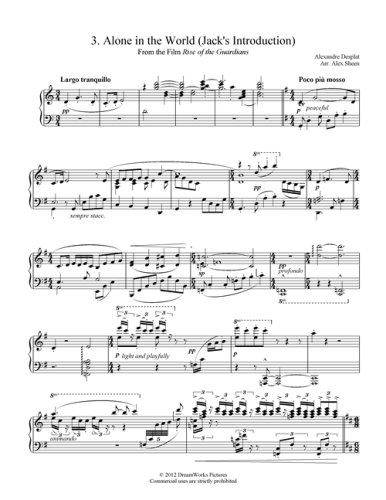 8 thoughts on “I Have Many Good News for You…”